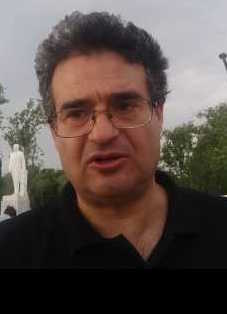 Vassilios Betsakos studied philology (classical specialization) at the Aristotle University of Thessaloniki (1990-1994). In his postgraduate studies, also in the Department of Philology, he studied the ethical and political philosophy of Aristotle (1990-1995). His doctoral research (1995-2004), under the supervision of the professor of History of Philosophy at the Department of Theology of AUTh L. Siasos, focused on the reception of Aristotelian philosophy by Byzantine theology and philosophy and ended up writing the interdisciplinary dissertation “Στάσις ἀεικίνητος. The renovation of the Aristotelian movement in the theology of Maximus the Confessor”.

He worked in Secondary Education from 1998 to 2021. From 2005 to 2015 he taught Ancient Greek Philology, Medieval Philology and Ancient Greek Philosophy in four departments of AUTh. For three years (2016-2019) he was a member of the Collaborating Scientific Staff of Hellenic Open University. Since 2014 he has been collaborating with the Institute of Educational Policy as an expert in the teaching of Ancient Greek. In this context, he has written educational material. Since 2021 he has served as Laboratory Teaching Staff at the Department of Political Science of AUTh.

His research interests focus on Aristotelian philosophy (physics, ethics, politics) and on its reception by ecclesiastical writers. For the last two years he has been studying the political discourse of ancient Greek writers, in the context of writing a study of the same title.

The main publications of Vassilios Betsakos are:

1. Στάσις ἀεικίνητος. The renovation of the Aristotelian movement in the theology of Maximus the Confessor, Armos, Athens 2006.

2. Soul therefore Life. The apophatic character of the Aristotelian theory of the soul, Armos, Athens 2007.

5. Aristotle’s Peripatoi. The survival of Aristotelian teaching in Late Antiquity, Byzantium, the Arab tradition, the Medieval West and the Ottoman Empire, Armos, Athens 2014.