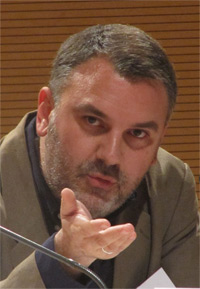 Yannis Stavrakakis studied political science at Panteion University (Athens) and received his MA degree from the Ideology and Discourse Analysis Programme at the University of Essex, where he also completed his PhD. He has worked at the Universities of Essex and Nottingham before taking up a position at the Aristotle University of Thessaloniki in 2006.

His research primarily focuses on contemporary political theory (with emphasis on psychoanalytic and poststructuralist approaches) and on the analysis of ideology and discourse in late modern societies (with emphasis on populism, environmentalism, nationalism and post‐democracy). He is the author of Lacan and the Political (Routledge, London & New York 1999) and The Lacanian Left (Edinburgh University Press/ SUNY Press, Edinburgh and Albany 2007) and co‐editor of Discourse Theory and Political Analysis (Manchester University Press, Manchester 2000), Lacan & Science (Karnac, London 2002), Aspects of Censorship in Greece (Nefeli, Athens 2008 [in Greek]) and The Political in Contemporary Art (Ekkremes, Athens 2008 [in Greek]). He has co-authored, with Nikolas Sevastakis, Populism, Anti-populism and Crisis (Nefeli, Athens 2012 [in Greek]).

He has served as vice-president of the Hellenic Political Science Association and co-convener of the Populism Specialist Group of the British Political Studies Association. During the period 2014-15 he headed the research project, POPULISMUS: Populist Discourse and Democracy: www.populismus.gr